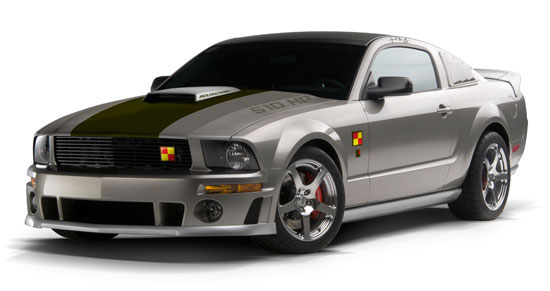 The ROUSH Performance P-51A™ Mustang is easily the highest horsepower Mustang that the company has produced at the time of its release, and represents the first time that internal engine components have been upgraded by ROUSH technicians in their Livonia, Mich., facility. It was determined that the only way to give the P-51A™ moniker its due was to completely break into the 4.6L, 3V and rebuild several of the functional internal components, which include a forged steel eight-bolt crankshaft, forged aluminum pistons with increased dish to lower the compression from 9:8 to 8:6, and forged steel H-Beam connecting rods. These upgraded parts were necessary for the stock Ford engine (which comes with 300 horsepower from the factory) to be able to withstand the additional power generated from the newest iteration of the legendary ROUSHcharger™ supercharger system.

The new ROUSH P-51A™ engine has a preliminary rating of at least 510 horsepower and 510 lb.-ft. torque. It is anticipated that final figures may even be slightly higher than this when final testing and calibration is approved by the ROUSH engineering staff.

The changes to the ROUSH P-51A™ don't end under the hood. A ROUSH aerobody kit will be installed, which includes a front fascia, chin spoiler, hood scoop and rear spoiler. The ROUSH black high-flow grill is added along with cooling side shields to give the car the aggressive look it needs while stalking the streets.

Internally the car will come with ROUSH sport leather seating and custom floor mats, both with an embroidered P-51A™ emblem. The white face gauges and billet aluminum pedals will get a lot of use as the driver bangs through the gears with the ROUSH short throw shift lever and retro black ball.

For those who look behind the 18-inch ROUSH forged five-spoke wheels will see the vaunted Stage 3 suspension underneath this vehicle. Designed to handle even the tightest twists and turns, this suspension includes specially-engineered and tuned front struts, rear shocks, front and rear springs, front and rear sway bars and jounce bumpers. The front brakes are also upgraded with 14-inch front two-piece rotors and four-piston calipers. Each component was specifically engineered so that ride comfort was not compromised at the expense of the tremendous gains in performance.