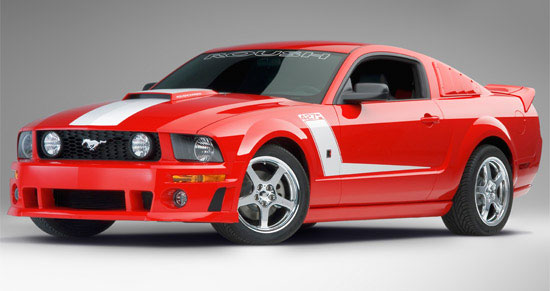 The number 427 has been intertwined in the Ford product line for many years, both as a car model and one of the most powerful and legendary engines in their line.  It is only natural that ROUSH, as perhaps the best Ford engine builder in the country, is the company to reintroduce the number to the automotive lexicon using modern engine technology.

Based on the acclaimed ROUSH Stage 3 Mustang, this version is slightly less in content but includes 100 percent of the fun factor.  The 427R horsepower package is highlighted by the intercooled ROUSHcharger* system which adds 135 horsepower and 65 lb-ft of torque to the base Ford 4.6L, 3-valve V8 powertrain system.  The additional power upgrade comes via a ROUSH-engineered ECM calibration which has been specially-tuned to work in harmony with the different exhaust system used on the vehicle.  The resulting total power rating for this vehicle is 435hp and 400 lb-ft of torque.

Further adding to the style and performance of the 2008 ROUSH 427R is a four-piece aerobody kit which includes a stylized front fascia, front chin spoiler, hood scoop and rear wing and ROUSH 18-inch cast chrome wheels with high-performance tires and the special 427R striping kit.