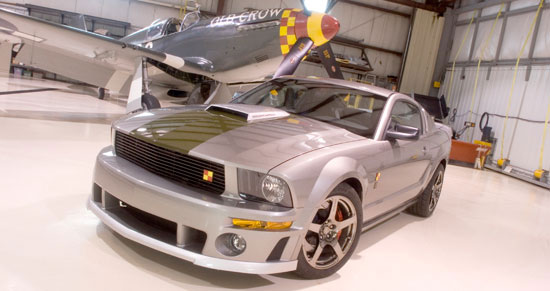 The ROUSH® P-51A™ was one of the most anticipated and sought-after Mustangs in the company's history. Following up on that successful launch, ROUSH in pleased to announce a P-51B™ model based on the 2009 chassis. This aeronautical themed Mustang will be limited to just 51 serialized units, each with 510 horsepower and 510 lb.-ft. of torque.

The ROUSH® technicians go under the hood and replace many of the internal components in the P-51B™ such as swapping to a forged aluminum pistons with an increased dish to lower the compression ration from 9.8 to 8.6, forged steel H-Beam connecting rods and a forged steel crankshaft. The fuel rails are changed, as are the fuel injectors and an upgraded fuel pump. ROUSH® also adds a secondary Sheave FEAD, upgrades the clutch and includes a custom-calibration for the ECM. The new six-piston brakes will provide the necessary stopping power. The P-51B™ will be available in the Vapor color Coupe model only with a five-speed manual transmission.

Cues to the legendary World War II fighter plane can be found throughout the ROUSH® P-51B™ Mustang.