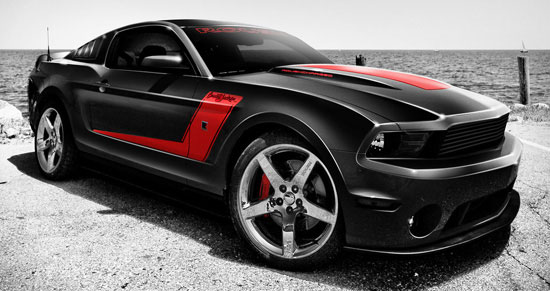 With a maximum of 25 serialized units built on the 2010 chassis, this car represents the first time that ROUSH will completely re-paint a Mustang from front fascia to rear bumper. Customers ordering the car, or the ROUSH authorized Ford dealerships that inventory a unit, can custom order both the base coat and the side stripes in any combination from the 25 available smoking hot Planet Color Barrett-Jackson Collector Color Series paints.

"We wanted to give customers the opportunity to enjoy the collectability of a very limited edition series of performance cars but still be able to customize it," noted Steve Davis, president of Barrett-Jackson. "By teaming with ROUSH and Planet Color, we merged the two, giving enthusiasts literally the best of both worlds."

In addition to the custom paint schemes, the 2010 Barrett-Jackson Edition ROUSH Mustang will sport 540 horsepower and 510 lb.-ft. of torque under the hood thanks to the R2300 ROUSHcharger® and several forged internal components such as the pistons and crankshaft. The Mustang will ride on 20-inch chrome wheels with high-performance Cooper RS3 tires; the suspension package includes ROUSH front struts, rear shocks, front and rear springs, front and rear stabilizer bars and jounce bumpers to turn any commute into a slalom course.

It comes fully-loaded with ROUSH body components to add to its appearance; resonator exhaust for a deep V-8 rumble; four-piston front brakes with 14-inch rotors and painted rear calipers with slotted rotors; and new upper and lower billet grille that removes the fog lamps and streamlines the appearance of the new Mustang while improving cooling performance. Interior enhancements include leather seats with an embroidered Barrett-Jackson logo; four-piece performance pedals; ROUSH illuminated sill plates; short throw shifter with black or white ball; and a new interior badge with the serial number engraved.