The ROUSH P-51 Mustang is a celebration of both aviation and performance vehicles.

"The ROUSH P-51 is the most powerful American pre-titled car ever built." Jack Roush 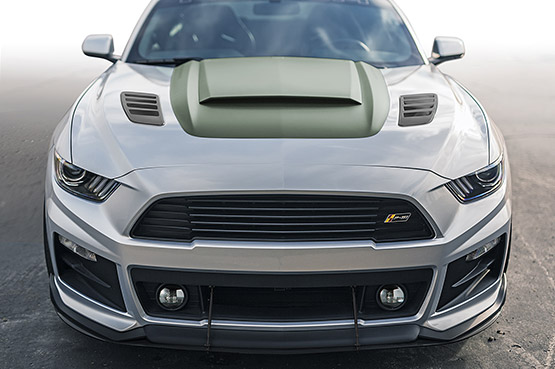 The P-51 is a culmination of Jack Roush's personal passion for both aviation and performance vehicles. The P-51 Mustang is a celebration of these two passions. This is the most powerful muscle car on the planet!

While there are “tuner” vehicles that have claimed greater horsepower, these vehicles are ‘post-titled’ conversions. They are not available pre-title from a dealership with a full factory 3-year/36,000-mile warranty.

Exhaust flows through the innovative ROUSH Active Exhaust System to offer the user a choice between three distinct preloaded exhaust sound profiles, as well as a “Custom” setting that can be tuned with a mobile application for virtually endless exhaust sound possibilities. The system features black coated tips laser-etched with a custom logo. 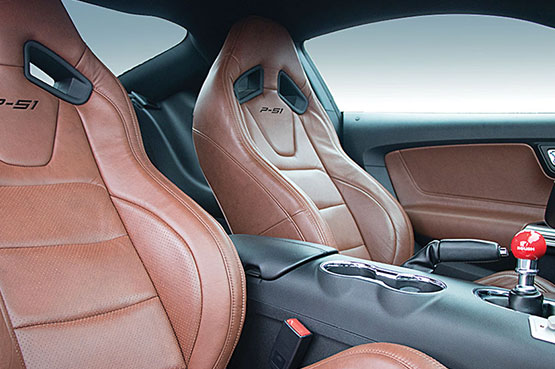 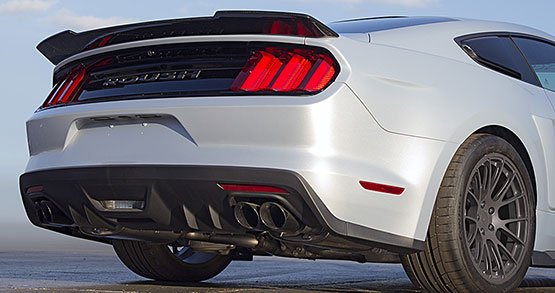 The P-51 carries many of the styling cues of our current lineup of ROUSH Mustangs. Exclusive to the P-51 are a new carbon rear deck lid spoiler, a new carbon fiber front splitter with support brackets, unique custom paint on the hood, front grille ambient lighting, and custom badges.*

At ROUSH Performance, it's not enough to deliver heart-pounding performance, unparalleled refinement, and race-inspired styling. We take a step further and back-up the 2017 ROUSH P-51 Mustang with an industry-leading 3-year, 36,000 mile limited warranty so you know that we’re along for the ride.

Our vehicles are rigorously engineered and tested to prevent issues down the road, but should they occur, you can rest assured in knowing that we're here to help.

North America’s P-51 Mustang was born out of necessity to blunt the onslaught of Nazi Germany in the early desperate, dark days of WWII.

More specifically, a handful of North America’s forward-thinking aerodynamicists, engineers, and designers contrived and produced the first prototype (NA-73X) for the British Air Purchasing Commission in 102 days, challenged by a 120-day deadline to present something which would revolutionize the concept of what an air superiority single-seat fighter could do.

Thanks to its advanced aerodynamics, airframe components, and fuel efficient 60° V12 engine layout, it had equal performance numbers with the best propeller driven fighters on both sides of the conflict. And the really bad news for the Luftwaffe was that it could stay airborne for up to twice as long as other Allied fighters, which meant that vulnerable Allied heavy bombers could be escorted and protected all the way in and out of hostile territory as they performed their task of bombing Germany into submission.

In total, less than 16,000 P-51s in 6 versions were produced – a relatively small number considering their impact and the fact that just one of the many German counterparts was produced in quantities of more than twice that of the Mustang.

The timing and introduction of ROUSH Performance’s first P-51 Mustang (2008 model year) accordingly, was chosen to showcase an advancement in supercharger technology which would, like its namesake, make possible unprecedented engine performance matched with great durability and reliability.